Home News Stories Light at the end of the tunnel…

Light at the end of the tunnel… 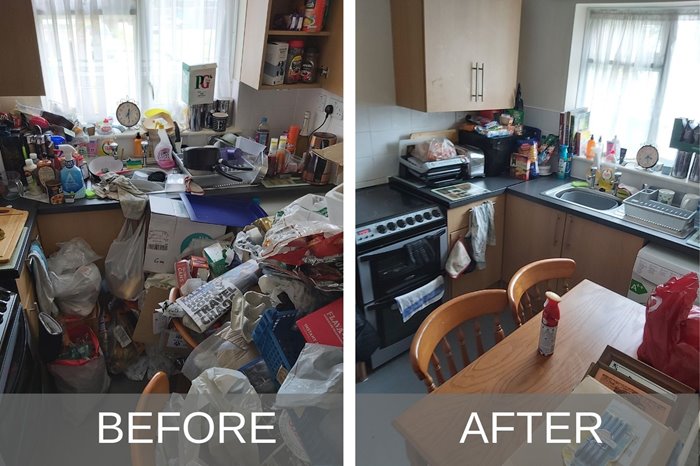 A Raven tenant who had become ashamed of his flat due to his excessive hoarding has had his life turned around due to our support and help.

The tenant, who suffers from ill health, had collected huge quantities of clothing and rubbish in his home in Horley.

“He was hoarding due to bereavement – the tragic loss of his son eight years ago – and he felt ashamed of what he was living in and would always put off inviting his other son over as he didn’t want him to see it.” explains Allyson, Raven’s tenancy enforcement officer.

“On my initial meeting with him it was clear that he was a fragile man. I reassured him that Raven would help as much as possible, but it was important that he allowed us to assist and to work with us.

“He wanted to change and make his flat a home again – he was positive and very engaging,” said Allyson.

It was a team effort; two support co-ordinators Georgia Neal and Christine Miles, Sharon Smart (asset administrator) and Imogen Pearman (temporary accommodation assistant), worked with him for the whole day to clear his kitchen and bedroom, making a huge improvement. This allowed the appointment to go ahead for the new fire alarms to be fitted.

“I can see the light at the end of the tunnel and I appreciate all the help and understanding that you have given and shown me,” he gratefully commented.

Despite his continuing poor health, he had made further progress and is tackling the last room to be cleared, the lounge.

He had sought help by visiting his GP, is seeing the mental health service staff and also speaks to The Samaritans when he needs to talk.

He has signed up to Raven’s enhanced support service and engages with support co-ordinators, Georgia and Christine, on a daily basis.

We’d like to thank all those involved in helping to transform his home and showing him there is hope. Building homes, changing lives at its best!