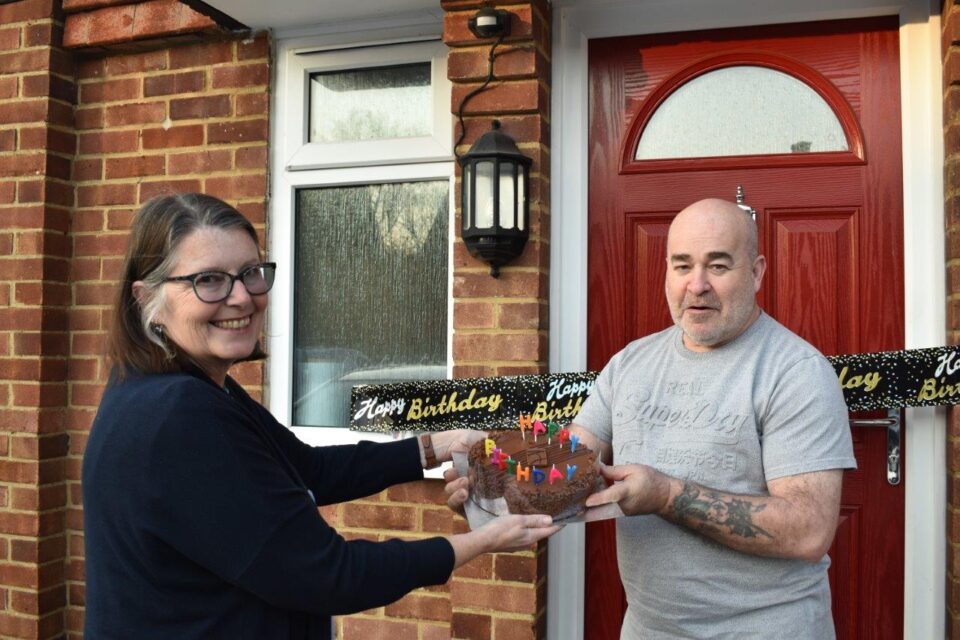 Redhill based housing association, Raven celebrated providing 20 years of affordable housing in Surrey and Sussex, this Friday (25th March). They were joined by local resident, David Arthur, who also celebrated his birthday on Friday. David has lived in his current Raven home with his wife Jackie and their three children and stepchildren since 1984.

When they first moved in, they were Reigate & Banstead Borough Council tenants but became R&B Housing Trust (now Raven) residents when the council transferred its housing stock to the social housing provider on 25th March 2002.

David who was thrilled to be asked to join the celebrations said: “I was delighted to hear I’d be sharing my birthday with Raven’s 20-year celebrations. Not wanting to reveal my age but this has been our family home since before then and it’s felt like home ever since. Here’s to the next 20 years!”

To celebrate their joint birthday Raven’s Head of Housing Services, Sue Young, visited David at his home in Horley to share a birthday cake. Sue, along with nine other colleagues currently working at Raven have worked for the organisation for over 20 years.

Sue joined the housing team at Reigate & Borough Council in 1992 as a temporary member of staff based at Caberfeigh in Redhill, spending most of her time in the “Estate Office” on Court Lodge Road in Horley.

Sue progressed through her career with the council’s Housing Team, developing her expertise to include managing tenancy issues, rent collection, repairs inspections, estate improvements and managing sheltered and temporary accommodation teams. In her role as a Senior Housing Officer Sue helped with the resident consultation ahead of the transfer of the council’s housing stock to R&B Housing Trust in 2002.

Amy Cheswick, Director of Customers and Partners at Raven, said: “A lot has changed over the last 20 years, but our purpose remains clear and resolute; we don’t just build houses, we build homes – and we provide services that change lives.

“Reaching our 20th anniversary is a significant milestone for Raven, and we can’t wait to celebrate our achievements with a year’s worth of activities planned over the coming months which we’ve called – 20 positive impacts.

The activities will be focused on working with the communities that we serve. So far, events include tree planting, wildflower seeding, providing community planters, offering our Raven vans to make even more community deliveries and supporting local community events alongside local charities and our partners. It is going to be a busy but I’m sure worthwhile year of positive impacts.”

To join Raven’s 20th anniversary celebrations residents and partners are being encouraged to get in touch by sending an email to raven@ravenht.org.uk to find out how they can get involved.